As you have hopefully read in Part I of this series, the general rule of thumb when integrating with Google Analytics, is to export your data from into your second tool. Essentially Google just makes exporting easy for you (though potentially the new GA API may one day also facilitate importing data into Google Analytics). However, exporting data from Google Analytics and into Kampyle is not possible, so a different approach is required.

Kampyle is a feedback survey tool – with the emphasis on feedback. For example, unlike Clicktools or SurveyMonkey you cannot build a survey on any subject matter you wish. Rather the system is tailored specifically for website feedback. This may sound like a limitation – but it isn’t. Kampyle is a tightly focused and simple to implement tool for getting your web site visitors to tell you about their user experience.

From a visitor’s point of view, Kampyle’s key strength lies is its ease of use . A popular implementation appears to be the display of a small coloured triangle placed at the bottom of a browser window (always in view despite the page length). Clicking on this launches a pop-up window that is very intuitive and quick to use. The visitor simply rates your web site and then they can select categories/subcategories in which to leave comments.

Try the purple one, to the bottom left of this window. In an Apple type of way, the whole experience is kind of fun!

The company was established in 2007 and is based in Tel Aviv, Israel.

I have assumed you have setup your Kampyle account and implemented their feedback form on your web site.

As I mentioned earlier, you cannot export Google Analytics data into Kampyle in the same way I demonstrated for Clicktools in Part I of this series. However Kampyle have come up with their own neat integration in the form of a Firefox add-on. If you have Greasemonkey with your Firefox, you can install the Kampyle add-on which shows your feedback data as part of the Google Analytics Dashboard. 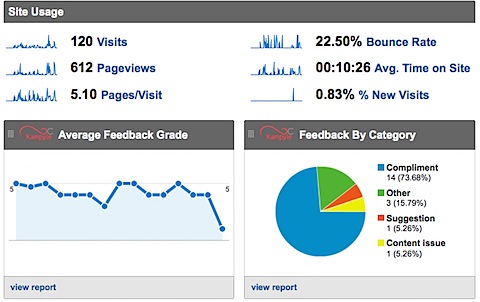 The add-on is still currently in beta, hence the integration shown above is a little basic. For example, the Kampyle charts displayed in the dashboard cannot be changed. For instance, I would like to see the last 5 submitted comments as snippets, as it is these that provide the actionable information you need. The average feedback grade and the distribution of feedback by category is interesting, but it is the comments that is going to drive change on your web site.

Hopefully the Google Analytics API will help with this (as well as not requiring multiple Firefox add-ons be installed).

Integration with Google Analytics is still very nascent. For the near future, it makes sense that Google’s focus is going to be on integrating GA with their own products such as Feedburner, Website Optimiser and Google Trends. That would be a very powerful suite of tools indeed.

With Google’s focus on internal integration, it means there are lots of opportunities for third party integrations. For example, merging the qualitative data of products such as Clicktools and Kampyle with the quantitative richness of Google Analytics, is a powerful combination that is just waiting to be exploited.