The New Google Analytics 360 Suite – A Game Changer for the Enterprise…?

There was a major announcement from Google today (15-March) – a new group of products, called the Google Analytics 360 Suite, is about to be launched. This is a suite of six (6) products – four of them are new, two are rebrands. These are my initial thoughts on whats hot about this and what you need to know… 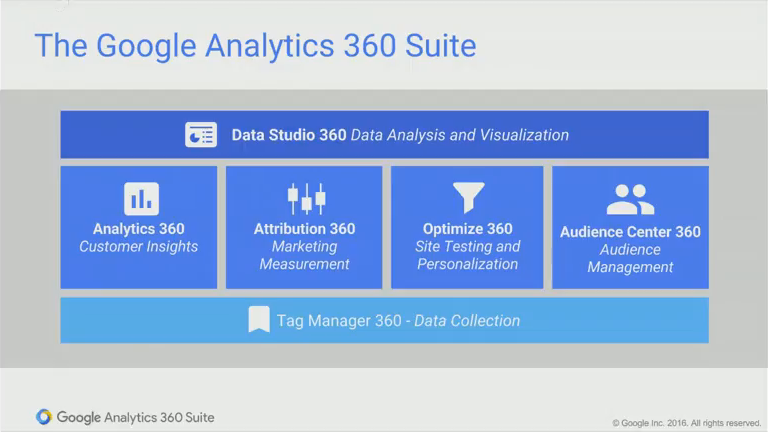 Google are very much presenting themselves as a “data platform” now. That is, not just a search and advertising platform. That was always the purpose of the Urchin acquisition back in 2005. But now things are becomeing much more integrated and holistic for marketers and web site owners. Its a big step up!

IMPORTANT: The Analytics 360 Suite is a group of paid-for products aimed at the enterprise. That is quite a departure for Google that so far has developed great, yet still free to use, analytics products. Hopefully that will continue. AFAIK the free Google Analytics tool and free GTM products will continue as-is. And I don’t expect that to ever change…!

What catches my interest about Analytics 360…?

The testing and personalisation product – a game changer in my view. On the surface this is your regular A/B and multivariate testing tool where marketers can show consumers multiple variations of their site. Its the same principal that Content Experiments was before, which lets face it, was not a strong feature (my thoughts on Content Experiments here). Google have now fixed this by making testing a separate product – a much, much better product.

I was demo’ed this product last June and was blown away by its power, its simplicity of setup, and ease of use. For example, define a complex multi-conditional segment in your Google Analytics, then use only that segment for testing and optimising your content.

This is a new data analysis and visualisation product – another game changer. “It integrates data across all the Analytics 360 Suite products and even other data sources ― turning it into rich, interactive reports and dashboards.”

Again I had the opportunity to play around with an early release of this product last June and was very impressed. I cancelled my existing “dashboard insights” tool subscription. The market is desperate for a well-thought out, easy-to-use and affordable tool like this.

Is this a Game Changer?

My view is that before this announcement, Adobe et al would argue that free tools from GA cannot be taken seriously at the enterprise level. It was a valid point – free today, gone tomorrow. Lets face it, many Google products have disappeared in recent years.

I knew that was never the case with GA because I worked there for 3 years – I saw the huge internal investment Google was putting in place and was privileged to be party to some of the early vision. But e.g. P&G, Ford, Sony etc. don’t know that.

Now that there is clear business model – and AdWords aside, a significant one, enterprises can now have confidence in buying into the “Google way”…

What are your thoughts on this new paid-for suit of analytics tools?