Google Analytics has come along way since the acquisition of Urchin was announced in April 2005. In this article I wanted to summarise the achievements made to date and discuss my view as the future for the product.

A brief history of Urchin

Urchin analytics has been around for some time. In fact since 1997, Urchin software has been slowly and quietly building a strong reputation for its server-side web analytics software. I first came across it in 2003, where its lightening fast processing power, small resource footprint and good value for money caught my attention. Even on a moderately specified Linux box, Urchin’s number crunching performance far exceeded anything else on the market – and still does today. This has made it particularly attractive to ISPs and web hosting companies that remain its largest customer base.

A differentiator for the Urchin product is its hybrid approach – combining data collection from both web server logfiles and page tag beacons results in a greater accuracy of visitor tracking. This is still the most accurate way to track web visitors, that is, without having force your visitor to login into your website (view the Accuracy Whitepaper for a detailed description). However, by 2003 the market was beginning to move away from server-side web analytics software as the method for benchmarking performance.

Instead, Marketers wanted more control. Server-side analytics is in the realm of IT departments – a place were, historically, marketing performance and user-experience measurement are not a priority. Now marketers wanted to be in the driving seat – accessing the data in order to manage and optimise campaign performance. The industry alternative was “page tagging” – that is no web server logfiles (and hence no IT) to worry about. These simplified implementations gave more independence to the marketers for web measurement.

In 2004, the San Diego based company launched their page tag web measurement service, called Urchin On-Demand. IT teams were no longer required to install or manage software. Although IT/developer input is still needed for page tag deployment, it is a much ‘lighter’ touch and less resource required than before as the responsibility for data collection, storage, archiving and reporting goes direct to Urchin. Only a page tag beacon (a small snippet of JavaScript) on each web page is required to do this.

In addition, Urchin On-Demand gained improved marketing reports – particularly for AdWords. It was this simple, yet powerful combination of a web measurement solution aimed at digital marketers, that caught Google’s attention. By April 2005 Google’s acquisition of Urchin Software Inc. was announced.

Since 2005, there have been 3 key phases of Google Analytics development and I believe 2010 will mark the beginning of Phase 4:

On November 11th 2005 Google Analytics was launched. A major part of the announcement was that the product was now free (originally Urchin On-Demand started from $500/month). This was a tipping point in the industry. Overnight Google re-wrote the entire industry business model – giving away a deep dive web analytics tool for free while everyone else charged based on volume of traffic.

The impact of that decision was dramatic. An industry that once counted its customers in the tens of thousands, now exploded. In fact so dramatic was the uptake of the service that it had to close to new subscribers for 10 months while new machines were allocated to the number crunching tasks at Google’s data centres. However, once re-opened, the user base of Google Analytics rapidly expanded and went beyond a million in a matter of months.

Looking back, the launch was a bit of a  PR disaster – the company took a lot of flak for under estimating demand (though I have no idea how it could have been done better!). But we had an alternative viewpoint – the launch still remains one of Google’s most successful product launches ever. Those within the company that had not heard of the team until then, certainly had by Friday 15th November. We were the new kids on the Googleplex block. That was a great week.

To all who witnessed the launch of Google Analytics in 2005, the product simply appeared to a re-branded version of the Urchin On-Demand service – just given away for free. Of course a great deal of hard work went into scaling the product so it could handle very large data sizes – both from the huge user base it was accumulating, but also from clients such as MySpace, YouTube etc. that had truly massive pageview volumes. 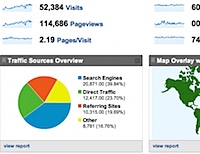 However, the fact remained that the user-interface, the most important part of any reporting tool, didn’t stand out from any other reporting tool. The launch of the new UI in April 2007 changed that (and as I was in the middle of writing the book, required  re-write!).

It was worth the wait. The same UI design is still used today and has proved so successful in user experience studies, that the format is being adopted throughout Google – notice the rounded style graphs you now see in AdWords and geo map overlay of Google Insights for example. The team responsible for that came from Adaptive Path , a Google acquisition of 2006.

Numerous enterprise clients get real value from Google Analytics, whether its the BBC, Roche, Tetrapak or non-profits such as Unicef or the World Health Organisation, many choose Google Analytics because it answers their questions quickly and efficiently (see a fuller list of Google Analytics users ). However, naysayers have commented on a number of missing “enterprise” level features. This was addressed in October 2008 with a plethora of new announcements. These include (still in beta):

If I had to choose one, I would say the advanced segments feature is probably the most powerful feature Google Analytics has ever had. It allows you to drill down and gain valuable insights as to how your web site is performing like never before (previously, filters and separate profiles were required).

Of course, there is still room for the competition to differentiate themselves. In fact, I was very disappointed to hear of Microsoft’s analytics demise recently. Deepmetrix (Microsoft’s  acquisition of 2007) was a respected tool and I evaluated it alongside Urchin in 2003. It was a very close call in terms of features and flexibility and my choice to go with Urchin essentially boiled down to the building of a remote relationship – a phone call with a lady called Megan Cash at Urchin Inc. made the difference. Lucky for me that it turned out to be the winning bet!

So what’s next for Google Analytics?

Of course new and clever features are always welcome if they empower the end user with actionable information. I deliberately empahsise the word actionable, as adding more data reports is pointless unless it drives action (it simply increases the “noise” level). However, the real value I feel that Google can bring to the table, is integration.

By this, I mean the integration with other Google products. Think how powerful a unified web metrics platform would be if it integrated Website Optimiser, YouTube, AdSense, Google Trends/Insights, Feedburner, Gmail, Google Docs, Widgets/iGoogle, Google Alerts, Google Groups , plus the other dozens of products being worked on that are not publicly viewable via Google Labs .

Even the current AdWords integration has some way to go. The import of cost/impression data is a doddle, but currently provides limited end-user benefit. Imagine the possibilities for bid management if you could take into account bounce rate, time on site, add-to-cart metrics etc., in addition to conversion and transaction rates. Then adjust your bids accordingly, all within one interface.

Should Google take this route, rather than become embroiled in a feature war as many competitors have done? I certainly hope so. The potential of a unified e-metrics platform is a very powerful toolset for the digital marketer.

The challenge of completing such an integration is enormous, so we won’t know for some time. But if the past investment that Google has made is anything to go by, the future will be very bright for Google Analytics. (Its odd that Microsoft cannot do this type of thing – or maybe they have an eye on a potential Yahoo acquisition…)

What are your thoughts on past achievements and the potential future for Google Analytics? As always, I would appreciate your rating of this article by clicking on the stars below.